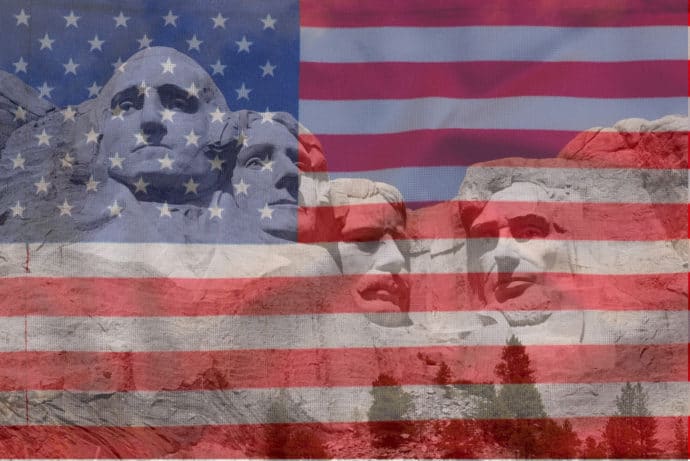 The third Monday in February is a federal holiday officially known as George Washington’s Birthday but commonly referred to as Presidents’ Day. Americans began celebrating Washington’s birthday shortly after his death in 1799, but it was not an official observance until 1879. That was when President Rutherford B. Hayes declared it a legal holiday to be observed on February 22 of each year. In an effort to create more three-day weekends, the Monday Holiday Law was passed in 1968, which meant that the holiday would now be observed on the third Monday in February each year.

One of the most impressive memorials in the United States is Mount Rushmore, located in the Black Hills of South Dakota. Mount Rushmore features the faces of four of our most well-known presidents that were carved into a granite batholith by Gutzon Borglum. George Washington, Thomas Jefferson, Theodore Roosevelt, and Abraham Lincoln were selected by Borglum because they and their presidencies represented the most important events in the history of the United States.

George Washington led the colonists in the Revolutionary War in their fight for independence from Great Britain. As the first president, he is considered the father of our country and founder of American democracy. Washington is the most prominent figure on the mountain and he represents the birth of the United States.

Thomas Jefferson, our third president, wrote the Declaration of Independence and as president, he doubled the size of our nation by purchasing the Louisiana Territory from France. Jefferson’s depiction on Mount Rushmore represents the growth of the country.

Theodore Roosevelt led our country during the rapid economic growth happening at the turn of the 20th century. As our 26th president, he was instrumental in the Panama Canal’s construction and worked to end monopolies. He also fought to protect the rights of the working class, as well as establish a conservation policy to protect national lands. Roosevelt was chosen by Borglum for the monument as a representation of the development of the United States.

In honor of Presidents’ Day, all Eastex Credit Union branches will be closed on Monday, February 19th.  You may continue to access your accounts via online and mobile banking during this time, and our ATMs are available 24/7.