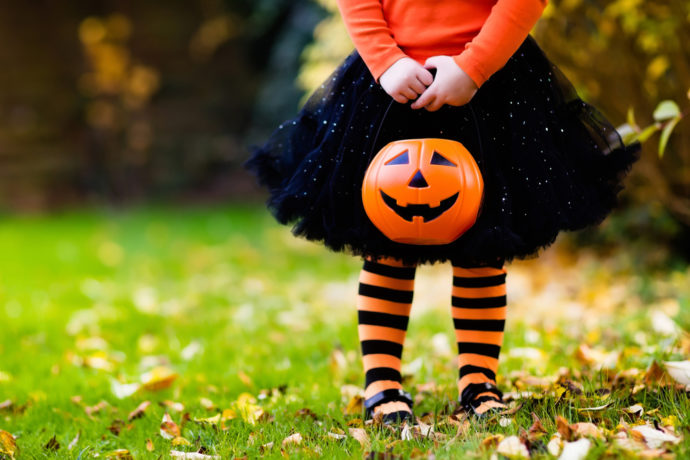 The temperatures are cooler, days are shorter, and pumpkins are everywhere, which means Halloween is just around the corner. Halloween is believed to have originated from the Celtic Ireland tradition of Samhain. Samhain was seen as the end of the lighter half of the year and beginning of the darker half. The Celts believed on this day ghosts could appear, so they wore masks to avoid harmful spirits. The day eventually became known as All-hallows Eve and has been celebrated in America since colonial times. The first celebrations in the colonies included harvest festivals where neighbors would eat, dance, sing, and tell ghost stories, but not everyone took part in the festivities. Halloween became much more popular with the influx of Irish immigrants that came to the United States during the potato famine of the 1840s. Americans began dressing in costumes and going house to house to ask for food, which evolved into the modern trick-or-treat tradition. Trick-or-treating became extremely popular as a way for communities to celebrate the day and the tradition continues to be practiced today.

The costumes worn on Halloween have changed throughout the centuries. In the 1800s, the majority of people who dressed in costume went as ghosts or donned simple, handmade masks. In the 1910s and 1920s, there were many who went trick-or-treating dressed as a clown or witch. Following World War II, costume manufacturing made transforming into various characters easier. The streets became filled with children dressed as Davy Crockett, Zorro, Superman, Mickey Mouse, cats, hula girls, cowboys and cowgirls. Rubber and plastic masks were popular beginning in the 1960s and 1970s and continuing into the 1980s, with children wearing the brightly colored masks and plastic dresses to look like their favorite characters from TV and film. Some of the most popular of this style were Planet of the Apes, Star Wars, He-Man, superheroes, G.I. Joe, Strawberry Shortcake, and Cabbage Patch Kids. From the 1990s on, mass production has made thousands of Halloween costumes available, although many prefer to make their own unique costume. The most popular costumes of the past few decades include princesses, superheroes, Teenage Mutant Ninja Turtles, the Scream mask, wizards, vampires, zombies, and pirates. A coordinated couple, family, and group costumes are popular, and pets have recently been included in the tradition of dressing up for Halloween.

In addition to dressing up, Halloween is also exciting for children because they get to go trick-or-treating. While those who answer the door, could give out a trick, treats, especially candy, are the norm. Candy corn first appeared in the 1880s, and Tootsie Rolls and Juicy Fruit gum began being handed out in the 1890s. The treats got even sweeter in the early 1900s with Hershey bars and Hershey kisses, followed by Reese’s Cups in the 1920s, Snickers in the 1930s, and M&Ms in the 1940s. Sweets were hard to come by during the sugar rationing of World War II, so apples, popcorn balls, and nuts were given to trick-or-treaters. Following the war, the treats given out were sweeter than ever, with Starbursts in the 1960s and Skittles in the 1980s. What children do with their collected candy varies. Some eat it all in one night, others saving theirs to enjoy over time, and others use it to practice bartering with their siblings and friends in order to procure more of their favorite kind.

Trick-or-treating and dressing in costume are not the only Halloween traditions. Many enjoy carving a Jack O’ Lantern. In the past, vegetables, such as especially large turnips, rutabagas, potatoes, and beets were used. They were hollowed out and a light was placed inside to scare away a spirit known as “Stingy Jack”. When the Irish came to America, they brought this tradition with them and began to carve pumpkins, since they were readily available and much larger.

The classic colors of Halloween, orange and black, can be traced to the Celtic Samhain festival. Orange symbolized the fall harvest, whereas black stood for the end or death of summer. Black cats began to be associated with spookiness during the Middle Ages and the superstition began that you didn’t want one to cross your path. Bobbing for apples was used as a type of fortune telling game in the past, where your success or failure in the game determined your future. Many of these symbols have remained part of modern Halloween celebrations and décor, but are no longer associated with their superstitious beginnings.

While the most popular costumes worn, treats handed out, and vegetables being carved on Halloween have changed over the decades, the fun and excitement have remained. Eastex CU wants to wish all of the witches, monsters, superheroes, princesses, and every other costumed reveler a happy and safe Halloween.